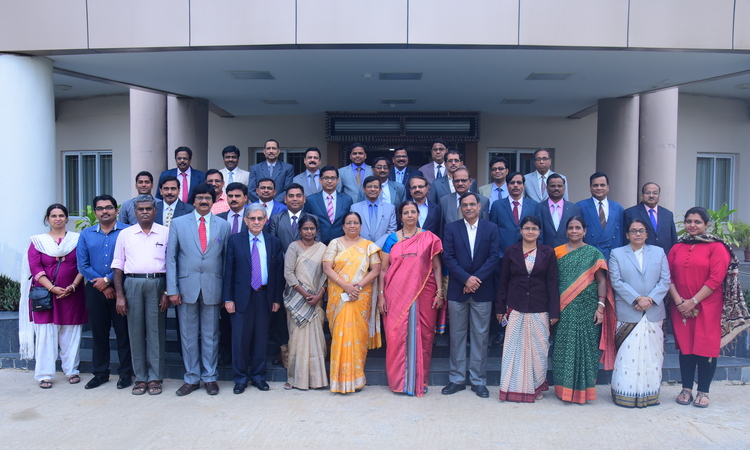 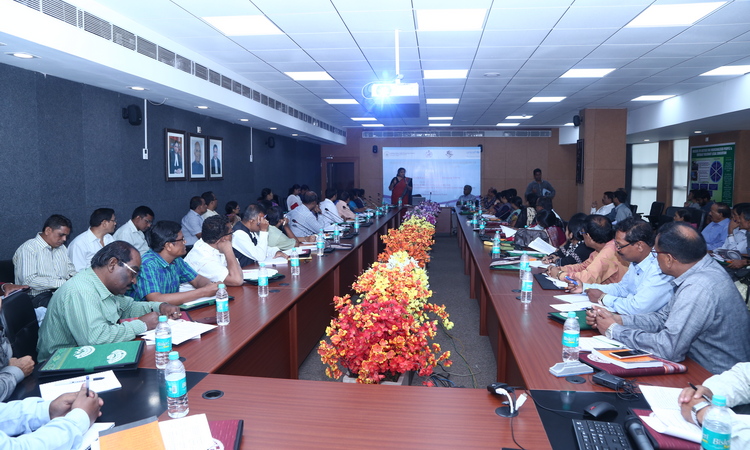 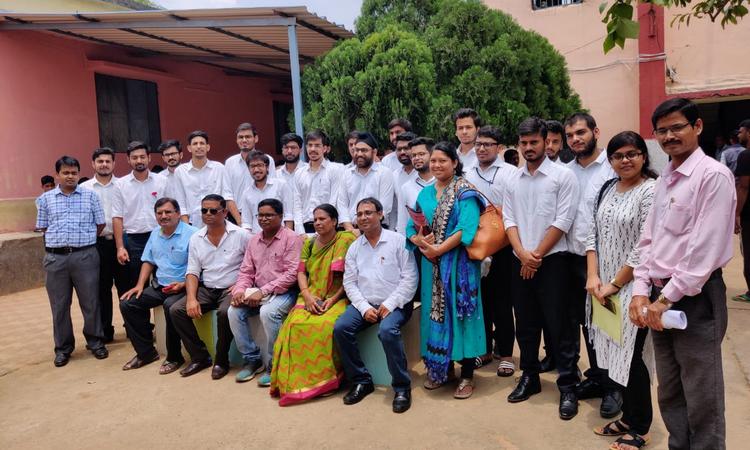 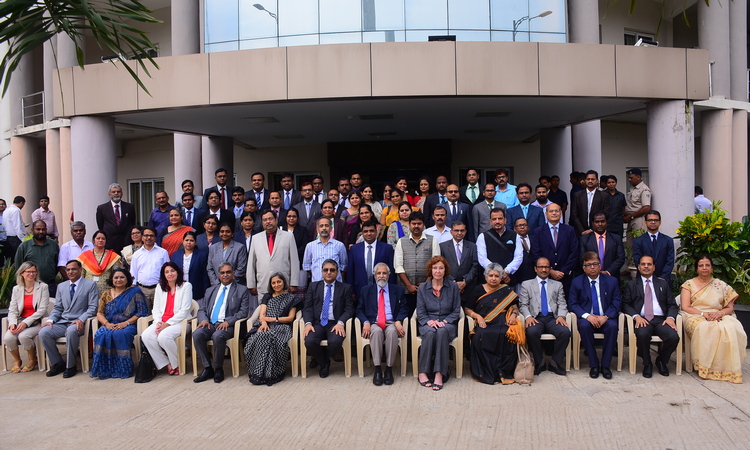 Centre for Child Rights (CCR) is the specialized research centre of the National Law University Odisha, Cuttack (NLUO). The Centre was founded on April 12, 2015 with ceremonial inauguration by Hon’ble Justice Dipak Misra, former Chief Justice of India and Visitor, NLUO in the august presence of the Hon’ble Chief Justice and Judges of Orissa High Court, and Secretary, Department of Women and Child Development, Government of Odisha. The Centre aims at strengthening law and justice for children and child wellbeing by supporting and initiating research, policy advocacy and community action on children related issues. The Centre intends to provide integrated support and consultancy to different layers of institutional governance for  protection and insurance of child rights.

Objectives of the Centre


Working of Juvenile Justice System in Odisha:
The Centre for Child Rights undertook a research to study the status of implementation of the Juvenile Justice (Care and Protection of Children) Act 2000 in Odisha with support of UNICEF under the project on ‘Effective Implementation of Children’s Laws in Odisha’. The study aimed to make rapid assessment of the implementation of Juvenile Justice (Care and Protection of Children) Act, 2000 in Odisha to get first hand insights about the operational structure of juvenile justice mechanisms; infrastructural facilities available at the juvenile justice institutions; quality of service delivery; convergence and coordination between juvenile justice institutions and allied system; and monitoring of the system. Survey was made in the districts of Balasore, Bhadrak, Ganjam, Jagatsinghpur, Khordha, Mayurbhanj and Puri of Odisha. Data was collected from Juvenile Justice Board, Child Welfare Committee, Special Juvenile Police Unit, Children Home, District Legal Services Authority of the above-mentioned districts by using structured questionnaire and interview schedules.

The study recommended for separating JJB from court premises, improved infrastructure for JJB, CWC and CCIs, providing contingency funds to SJPUs and CWCs, filling up the vacancies in the DCPUs, inter-departmental convergence at the district and block level, strengthening of accountability, capacity building of stakeholders, and developing robust data base of children of vulnerable communities.

Effective Disposal of Cases in Juvenile Justice Boards of Odisha:
The research to study the pendency of juvenile cases in Odisha has been undertaken by the Centre for Child Rights, NLUO with the support of UNICEF, Bhubaneswar under the project on Effective Implementation of Children’s Laws in Odisha. The background idea of this study is that the policy paper prepared by the Centre for Child Rights on the ‘Working of Juvenile Justice System in Odisha’ in 2016 highlighted the functional deficiencies of the Juvenile Justice Boards with regard to case disposal and recommended for a study on pendency status in all JJ Boards of Odisha. As the pendency is the outcome of slow disposition or increasing case load, therefore this study has been commissioned with the title of ‘Effective Disposal of Cases in Juvenile Justice Boards of Odisha’.The key objective of the study was get insight about registration, disposal and pendency of cases across all the JJ Boards in Odisha and to identify the challenges that hinders to effective pendency management. Specifically the study aimed to bring out district fact sheet on the pendency status in JJ Boards.  The report is based on the review of statue and case law on juvenile justice, secondary information and the primary data collected from the JJ Boards in all thirty districts of Odisha by using structured survey schedule. Views and opinions of the Principal Magistrates of JJ Boards with regard to case pendency and reasons thereto were collected through personal interaction.The report highlights reporting, disposal and pendency of cases and analyses the duration of pendency, nature of pendency, and reasons of pendency. The study recommends for additional JJBs in high case load districts, a judicial magistrate exclusively for JJB, dedicated personnel to work exclusively in the Special Juvenile Police Units, regular training, improved knowledge and skills among human resources of the child protection structures, improved infrastructure with child-friendly mechanisms.

Exploring Changing Dynamics of Children’s Laws in India in Post-Liberalization Era:
The research on ‘Exploring Changing Dynamicsof Children’s Laws in India in Post-Liberalization Era’ was undertaken with the support of Indian Council for Social Science Research (ICSSR), New Delhi. The background for doing this research is that the post-liberalisation era has witnessed many measures towards the protection and respect for the rights of children in terms of the laws (legislature); policies and schemes (executive); as well as judgments of the courts (judiciary). This research was undertaken with objective to understand the changing perception of law, legal system and justice institutions, and document trend of  child rights practices in the post-liberalization era with a view to identify the pattern of changes, both negative and positive, in the life situation of India’s children.

The research undertook field study in six districts of the state of Odisha namely Cuttack, Puri, Ganjam, Koraput, Keonjhar and Sundergarh. The study collected empirical evidence through field study to ascertain gaps between macro level policy and practices in child-centric programmes. The study included a desk review of the laws and policies, particularly focusing on the post-liberalisation developments, along with reviewing the existing research documents and available literature on child rights in India. The study sourced secondary information from published as well as unpublished reports of government, research institutions and non-governmental organizations. In order to understand the approach of judiciary towards the child rights in the post-liberalisation period, judgments, mainly of the Supreme Court of India and of some other High Courts have been analysed.

Focus Group Discussions were held with the District Education Officers to obtain qualitative information on the status, issues and challenges of the right to education. The primary data were collected through observations and personal interaction with the respondents in the form of informal interviews. Semi-structured interview schedule was used for collecting information from the “children’s courts”, “juvenile justice boards”, “child welfare committees”, “special juvenile police units.”

The study involved research on the developments in the post-liberalisation period in four thematic areas, namely, Juvenile Justice; Child Sexual Abuse; Child Labour; and Right to Education. Each of the themes have been presented in separate chapters. Apart from the four thematic chapters, the report also contains separate chapter on Introduction, Law and Justice for Children in India and Conclusion.

Social Mapping of Migrant Workers of Odisha:
NLUO has undertaken a study on Social Mapping Migrant Workers in Odisha with the support of the Labour Department, Government of Odisha. The study was commissioned through the Centre for Child Rights in consultation with the Labour Commission, Government of Odisha. The research methods followed in the study include primary data collection through household survey of the migrant families, focus group discussion with the representatives of gram panchayats through interview schedule, secondary data analysis and review of law, policy and literature on the corresponding issues of labour migration. The key objective of the study is to understand, document and analyse the context, practice and challenges of labour migration in Odisha. The  household survey was made in 90 Gram Panchayats across  five Blocks of Odisha State. Among them, four Blocks namely Bongomunda, Muribahal, Saintala and Turekela were from Balangir district and another was Sinapali Block in the district of Nuapada. The survey covered a total of 7648 households and 31,347 persons. The study recommended for national labor migration policy, robust data base of the migrants, research and evaluative studies, promotion of apprenticeship, vocational training, and internship and income generation activities for rural youths, sensitization of vulnerable communities, migration registration, skill linkage, and social protection through food, health and economic securities.

Child Rights is a Seminar Paper offered as an optional paper to the 5th Year students in their 9th (odd) Semester.  It has been offered for the last 5 years at NLU, Odisha. For the past 4 years, maximum 60 students of the batch were allowed to opt for this Paper. However, because of the high demand raised by the students who wanted to study this Paper, the maximum cap for registration was increased to 120 students this time (for the current academic session). More than 100 students have chosen to study this Paper.

This Seminar Paper includes a discussion of the different issues and problems that a child faces in today’s society and attempts to find the gaps in the law, which leave the child more vulnerable and prone to abuse. The students opting for this Paper learn about various reasons why violations of a child’s rights occur in today’s world. They also get to suggest solutions to the problem of lack of proper implementation (of laws and policies) that is prevalent in various parts of India when it comes to guaranteeing children’s rights.

Topics covered in the Paper are diverse - from Juvenile Justice (laws related to child in conflict with law, child in need of care and protection, child victims etc.) to laws requiring protection like Child Labour, Child Marriage, Child Abuse etc., to Rights like that of Education of Children - many areas are covered. Controversial questions like how far Restorative Justice (for children in conflict with law) is applicable in a country like India or how to balance patents rights versus children's rights are raised and discussed in the classes. Debatable topics like the scope of children's right to choice etc. are also explored in the classes. Controversial topics like how far we have been able to ensure the participation of children or the consideration of their voices, or whether we have been able to achieve true well being of children are visited again and again during the Semester. A detailed course outline for the current year is attached herewith.