The seminar was sponsored by the National Commission for Women. NCW is the statutory body of the Government of India, generally concerned with advising the government on all policy matters affecting women. NCW envisions that Indian woman must be safe both within and outside the home, and should be fully empowered to enjoy all of her rights and entitlements, with equal opportunities to contribute in all spheres of life. With its countless accomplishments, NCW continues to promote equality and empower women in all sectors.

Every year the Commission collaborates with Government, Semi Government organizations, Universities, Academic and Research Organizations to undertake research studies and disseminate information through seminars and conferences so as to implement the mandate on identified specific issues of concern. This year, Commission has identified, “Working of Mahila Thana / Women Police Stations” as one of the topics/themes for deliberation.

Centre for Women and Law, NLUO had taken up upon itself to further this objective of NCW. CWL is a Research Centre of National Law University Odisha which works with the combined effort of faculty members and students of NLUO. The Centre was established with a view of having a platform for unremitting study of the structural, societal, legal and regulatory issues associated with gender from a multi-disciplinary perspective. The Centre works towards dissemination of knowledge and sensitization of society through its publications, seminars and conferences and this Seminar is a step towards this purpose.

Talking About the Theme of the Seminar

In India, one-third of married women are victims of domestic violence. Gender-based violence (GBV), including domestic violence, sexual assault, rape, and stalking, is a serious danger to women’s equality and self-determination in public and private areas. Poor and disenfranchised people, particularly women, often lack access to a responsive police force, resulting in decreased security and increased crime and violence.

In an effort to address these concerns of Violence against Women (VAW), the Parliament has created a number of laws that allow women who have been victimized by violence to seek legal redress, such as the Criminal Law Amendment Act of 2013, the Sexual Harassment of Women at Workplace (Prevention, Prohibition and Redress) Act of 2013, and the Protection of Women from Domestic Violence Act of 2005, giving those who are victims of violence a legal avenue for recourse. While the legal amendments were a step in the right direction, there was a need to establish a gender and child sensitive front level functionary, namely the police force, which is the first point of contact for women and children in crisis.

In an effort to address these problems and safeguard women from assault and exploitation, several states have constructed Mahila Thana or an all-female police station (AWPS). Gender-sensitive policing necessitates specialised training, more female presence in the force, and community engagement to incorporate gender concerns into policies, procedures, and operational practices.

It is a matter of general wisdom that women who are victims of violence or harassment may not find it easy owing to a social stigma attached to it to approach the police or other authorities for getting help or support, The ease of filing cases and to provide them an effective alternative for getting help and support is one of the reasons why the women police stations are gaining attraction countrywide, Furthermore, opening an all women police station enhances the women’s representation in law enforcement agencies.

Aim of the Seminar

In this backdrop, the aim of this seminar was to conduct deliberations, discussions, exchange of thought, and facilitation. It helped in identifying the deficiency, initiatives relating to the effective enforcement of the same. It also helped in understanding the utility of initiatives taken at various levels of policing. The Centre had itself conducted research to assess whether women are preferring WPS over police stations and its impact to minimize the crime against women. The suggestions received from the honorable panelists, discussants, paper presenters and participants has been submitted to the National Commission for Women for further policy developments.

The Seminar – Gist of Deliberations

The Second Technical Session consisted of an Open House discussion with Dr. Kiran Bedi, Retd. IPS, Ex-Lieutenant Governor of Puducherry. Participants from various universities posed questions to Dr. Bedi on topics such as Domestic Violence and the Law, the Concept of Women Police Stations and representation of women in the police force. Dr Bedi also touched upon the importance of ethics in Law and urged the audience not to compromise on their morals.

The Seminar concluded with the Valedictory session and Group Photograph with the resource persons. 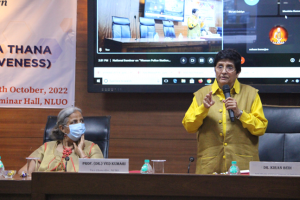