After 2 years of battling with the pandemic, the Cultural Committee of the National Law University Odisha, Cuttack organized the Annual Cultural Fest Kairaan 2022 between April 22, 2022 and April 24, 2022 and the theme for this year was “Lost Summers”, which appropriately portrays the fact that while we have lost two summers of our lives due to the pandemic.

Day 1 of KAIRAAN commenced on Friday, April 22nd with various events planned for students and staff members of the University. We got the ball rolling with our very first event, Whisper Challenge, a fun-adaptation of the classic “Chinese Whisper”, for our beloved staff members. We also conducted fun games like musical chairs, antakshari and dumb charades for the staff members. The day got more interesting with a treasure hunt planned for the students of NLUO. Students were looking for clues and sprinting around campus to be the first to complete the hunt. Post the treasure hunt and to end the night on a good note, we had a cultural night with music, dance and delicious food.

Day 2, on April 23rd, saw many students from around the nation coming in. The night began with a campus-wide photography contest, “Shootout at Kairaan”, which had the shutterbugs going wild with their skills. After this, the Odisha Chapter of IDIA, a student-run voluntary organisation which spreads the agenda of “education for all”, conducted a fundraiser “Easier Said than Run”. Shortly after, the stage was set and gave way to the young poets with “Du Coer”, which literally means from the heart, a Slam Poetry Competition. Next came the singers, showcasing their many talents in both eastern and western music, in the singing competition entitled “Pitch Perfect”. The final competition that Day 2 saw was that of “Project Runway”, a fashion show on the theme of “A Summer Joy”. Students came draped up in bright colours, embellished with flowers, and put their best foot forward! After the students took over the stage, the artists of the night, Underground Authority, performed their set and had students bouncing to their beats and banging their heads to their catchy, electrifying numbers! Lastly, DJ Ajex took over and had everyone singing along to his mixes of catchy Bollywood numbers!

The final day of KAIRAAN was on the 24th of April and began with our beloved staff showing their talents in singing, dance, poetry and what not in the Staff Talent Show! The honourable Vice Chancellor Ma’am and Registrar Sir also graced us with their stellar performances. This was followed up by the tantalising dance performances from teams and participants from various colleges in “High Strung” and “Step Up”. After this, the bands of different colleges had us swaying our hands to their tunes in “Battle of the Bands”. Then came the time for the artist that our college has eagerly waited for: Lost Stories! Everyone jumped along to their famous numbers. Finally, the night came to an end with DJ Satya. The students bid adieu to the fest which brightened their college lives and made things feel much more normal in such tedious times. 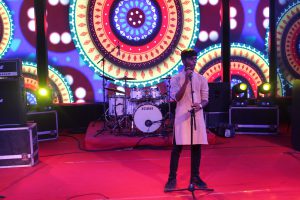