From 1984 onwards, the Government of India has designated the 12th of January of each year as ‘The National Youth Day’. 'The National Youth Day' is celebrated to commemorate the birth anniversary of the great Indian thinker, philosopher, and social leader, Swami Vivekananda's life and dedication to the nation.

In the year 1987-88, Nehru Yuva Kendra Sangathan(NYKS) was set up as an autonomous organization under the Government of India, Ministry of Youth Affairs and Sports. NYKS also is the largest grassroots-level youth organization in India. Its motto remains to channel the power of youth on the principles of voluntarism, self-help, and community participation.

We share with you some glimpses from the event. 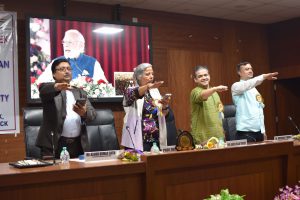