IDG NLUO, presents to you ALUMNI CONNECT 2.0, on 16th February 2019. The interactive session gives every student at NLUO an opportunity to interact with the alumni of their own college, who are faring well in their professional careers and have brought great pride to the college.

Alumni Connect 2.0 marks the presence of:

Srivignesh graduated from NLUO in 2014. Presently, he practices Litigation at the Supreme Court of India. In 2019, Srivignesh extended his work base by establishing an office at Chennai too.

Neeraj graduated from NLUO in 2014. He began his practice with the Competition Law team at Dhir & Dhir Associates, New Delhi. Presently Neeraj works as a Senior Associate at the New Delhi office of Cyril Amarchand Mangaldas.

Praveen graduated from NLUO in 2014. He cleared Rajasthan Judicial Services in 2016 and since April 2017, he is posted as Metropolitan Magistrate in Jaipur.

Karuvaki graduated from NLUO in 2014. Her career started at Hriday, a non- profit organization under the Public Health Foundation of India, where she worked extensively on Health Laws. Subsequently, she moved on to work for animal rights with PETA India and is currently working as a Program Analyst at iProbono India. 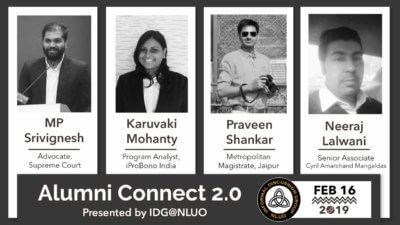